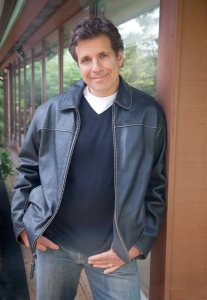 Jake Ehrenreich is a musician, author and playwright, and world recognized expert on Comedy, the Catskills and the Holocaust. A Brooklyn born child of survivors, he is best known as star of his award winning show A Jew Grows in Brooklyn, which broke box office records at the historic Lambs Theater in the heart of Broadway.

Jake is privileged to be among the 2016 inductees into the Brooklyn Jewish Hall of Fame.

His writings appear in the Academic Anthology Summer Haven, The Catskills, The Holocaust and the Literary Imagination alongside Isaac Bashevis Singer and Art Spiegelman, and A Jew Grows in Brooklyn is now a best selling book by HCI (the Chicken Soup for the Soul publishers).

Jake’s expertise is on display in the documentaries Making Light in Terezin and most recently in The Last Laugh alongside Mel Brooks, Carl Reiner and Louis C.K.. He is also Execuctive Producer of the award winning short film Welcome to Where You’ve Always Been.

The City of New York honored Jake by proclaiming March 17, 2012
A Jew Grows in Brooklyn Day, and the iconic Carnegie Deli followed suit by likewise naming a sandwich to honor the occasion.

As a performer, Jake has appeared on Broadway in Dancin’, Barnum, and They’re Playing Our Song, and toured internationally as Ringo in Beatlemania. A native New Yorker, he starred for Joseph Papp at the Public Theater, and was featured performer at New York’s famed Rainbow Room, as well as the iconic Bottom Line and Red Parrot Nightclubs. In addition to his numerous TV appearances, Jake has performed, recorded and toured with such diverse artists as with Richie Havens, Greg Allman, Whitney Houston, Jay Leno and Tito Puente.

His most recent CD release is Yiddish Unplugged, and his new TV variety show is scheduled to premier nationwide in fall 2017.

Jake Ehrenreich lives outside NYC with his wife of 20 years, Lisa – a 4th Dan Black Belt Tae Kwon Do Master instructor – and his 18 year old son Dovy, a 3rd Dan Black Belt who is currently studying in Israel on a gap year.

A Jew Grows in Brooklyn 2.0 is the brand new version of the iconic hit show. In it, playwright Jake Ehrenreich incorporates all the new influences – from film appearances to new writings to documentaries – that have renewed his vision, deepened his insight, and informed his life since the writing of the original show. Lots of brand new comedy, music, stories, video and much more make this innovative new production one that continues to delight audiences and critics.

A smash hit in the heart of the Broadway, where it played for a more than a year and a half, A Jew Grows in Brooklyn is an “engaging, poignant and hilarious” (Palm Beach Post) comedy musical about the search for identity and meaning. The highly acclaimed show chronicles the life of Jake Ehrenreich; a uniquely talented American born child of Holocaust survivors.

From the streets of Brooklyn and struggle with his family’s past, to the laughter and rebirth of Catskills summers, to his mother and sisters heartbreaking early Alzheimers disease, this “tour de force performance” (Las Vegas Journal Review) is “a delightful journey that speaks to anyone hoping to live out the American Dream” (ABC TV).

The New York Times raves A Jew Grows in Brooklyn is “funny, touching and beautiful… you don’t have to be Jewish or Brooklynish…Jake Ehrenreich is Dazzling!”  The Philadelphia Inquirer calls it “An uplifting treasure with universal appeal—in the same elevated company as Billy Crystal’s 700 Sundays, and Chaz Palminteri’s A Bronx Tale.”

Through stories, comedy, music, and multi-media video and photos– including a classic Rock Medley (California Dreamin’, Secret Agent Man, Sunshine of Your Love), a multi-instrumental version of Louis Prima’s Sing, Sing, Sing, and even a selection of Yiddish songs – Jake mesmerizingly recreates his unforgettable journey of discovery and lessons learned. From the stoops of Brooklyn to Rock n’ Roll days–from the comedy and musical stages of the Catskills and Broadway to the bedsides of ailing parents and siblings, this show “has a glow all it’s own” (Chicago Tribune) and is “one of the most touching, soulful, and laugh out loud shows you’ll ever see!”   (Jazz FM 91).

Jake’s story is personal and universal at the same time, and has now spawned a book by the “Chicken Soup for the Soul” Publishers A Jew Grows in Brooklyn, the Curious Reflections of a First Generation American.

Click HERE to find out how Jake can help your organization raise funds!