Acerbic comedy and salty satire are in store for The Women’s Theatre Project audiences as the well respected company enters into its 11th season and its second year at the Willow Theatre in Boca Raton’s Sugar Sand Park.  The Lyons will run from December 6th through December 22nd, 2013, and Red Hot Patriot: The Kick-Ass Wit of Molly Ivins will play February 28th through March 16th, 2014.  It will be the first time either of these plays has been produced in South Florida.

The Lyons, Nicky Silver’s outrageously funny and stirring play about a family coming to terms with the impending death of its patriarch received glowing reviews when it ran on Broadway in 2012.   The play focuses on Rita Lyons and her grown children, who, as they gather to say goodbye, learn that despite being a family, each of them is totally isolated. Afraid of closeness and solitude, they are pushed into a new arena – the human connection. New York Magazine’s Scott Brown said The Lyons is “simply trying to tell a funny, furious little tale of family annihilation with honesty, savagery, and humanity.”

“The complex and inter-connected relationships in this family remind us how close comedy and tragedy are to each other,” says TWTP artistic director Genie Croft. “I found the dysfunctional family in The Lyons to be darkly funny, smart, and deeply affecting.  It’s an exciting script that roars to life, with characters who behave with complicated emotions, and this makes it an excellent choice for the type of work that The Women’s Theatre Project likes to offer on stage. Although it’s the first play TWTP is producing that was written by a man (our past 32 productions have all been written by women), we feel it is a unique opportunity to continue to expand and evolve our mission, by giving voice to these characters, theme, and plot.”

With Red Hot Patriot: The Kick-Ass Wit of Molly Ivins audiences will be 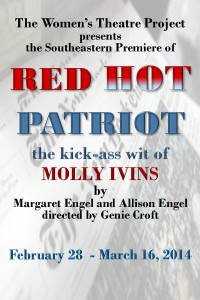 treated to the wit and wisdom of a true original.  Barbara Bradshaw will star as the unsinkable, unstoppable Molly Ivins. The ‘dyed-in-the-wool liberal from deep in the heart of Texas’, famously brassy newspaper columnist and best-selling author was a crusading journalist who broke gender barriers with her sharp-tongued wit, humor, and political savvy to establish herself as one of the nation’s most influential political columnists.  Written by twin sisters Margaret and Allison Engel, the play is a true tribute to Ivin’s wit, sense of humor, and love of irony. The script also delves into Ivins’ life to reveal what drove her from a comfortable upper- class upbringing and education to the good-ole-boy, hard-drinking world of journalism and political warfare.  Red Hot Patriot seamlessly weaves personal anecdotes with a sharp and clever look at one of our favorite national pastimes – politics.

“I love the fact that the Dallas Times Herald let Ivins write what she pleased,” says Croft, “They even endorsed that policy on billboards that read: ‘Molly Ivins, Can’t Say That, Can She?’ The Engels’ script captures the jokes about provoking politicians, and her reminiscences of personal heartbreak inform and offer insight into who she was.”