From Lily Langtree to Cyndi Lauper and Betty Boop to Tina Turner, or from Rosie the Riveter to Britney Spears, female singers and pop stars and their music provide a vivid reflection of how much has changed for women since the beginning of the 20th century.  RESPECT: A Musical Journey of Women, which has evolved from a one-woman dissertation to an international hit musical revue since its debut, is an entertaining, exuberant, and exhilarating look at the lives of women as reflected in the popular music of the times.  RESPECT: A Musical Journey of Women will run from December 5th through January 5th at the Mizner Park Cultural Arts Center’s Studio Theatre in Boca Raton. 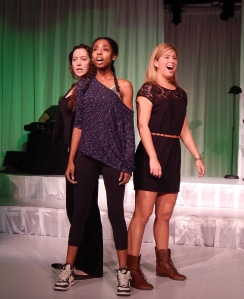 This production, which is part of the BRTG’s newly extended season, is a return of the very first, wildly popular Florida incarnation of RESPECT and will be directed by the show’s original director, Peter J. Loewy. Featuring an ensemble cast of four and a live band, and combining excerpts of 60 songs including “Someone to Watch Over Me,” “I Will Survive,” “I Will Follow Him,” “These Boots are Made for Walking,” “What’s Love Got to Do with it,” and “Hero” with women’s own stories about finding dreams, lost love, relationship issues, entering the workforce, gaining independence, and more, RESPECT has resonated with audiences around the world. Men as well as women will have no trouble at all identifying with the messages of encouragement and empowerment that RESPECT portrays.

Loewy, who recently produced a successful revival of RESPECT in his own theatre in Metuchen, New Jersey, is excited to bring the show back to its ‘state of origin’.  “It’s a great show,” he explains.  “Everyone who sees it loves it.  It’s ‘up’, it’s fun, and yet it has a story to tell.  And I get as many positive comments about it from men, as I do from women!”

RESPECT definitely has a universal appeal. “What’s interesting – and exciting – to me about RESPECT is that it’s attractive to all audiences,” Loewy says.  “We get mothers with their daughters, and grandmothers with their granddaughters, not to mention their male counterparts!  When we played at the Cuillo Centre for the Arts and at the 26th Street Theatre in Wilton Manors, we would chat with people before and after the show.  Some of them had seen it 5 or more times!”

Along with Sharyn Peoples, who recently received rave

reviews in Slow Burn Theatre Company’s production of Next to Normal, Carla Bordonada, Nicole Kinzel, and Ziarra Washington will make up the cast of RESPECT: A Musical Journey of Women; the show’s original musical director, Phil Hinton is also on board.

There will be two special New Year’s Eve ‘champagne performances’ of RESPECT (at 4 pm and 9 pm) on December 31st.

Tickets for RESPECT are on sale now and can be

Praise for RESPECT: A Musical Journey of Women:

“I loved the show. It was the sound track of my life. Everyone should go see it!”  Patti LaBelle

“RESPECT is fun! Women love RESPECT. They Adore it!”  The Philadelphia Inquirer

“It’s  One Heck Of A Fun Ride, complete with some of your favorite songs of the 20th Century.  This is a Must See and Must Hear Musical that you will want to see more than once!” Broadwayworld.com

“ ‘Respect’ — and they ain’t lyin’! Musicals have been made from classic novels, campy movies and even comic strips, but it seems likely that RESPECT: A Musical Journey of Women is the first show to come from a social history textbook.”  Hap Erstein, Palm Beach Post/PalmBeachArtsPaper

“RESPECT…. is an engaging and entertaining look at the evolving roles of women in the 20th century. Using popular Top 40 hits, music, video images, and costumes, Dr. Marcic illustrates how, in the early part of the century, song lyrics resonated with women’s dependency and submissiveness; echoed their rebellion in the late 1960s; and reflected their independence in the 1990s.” Williams, MA newspaper