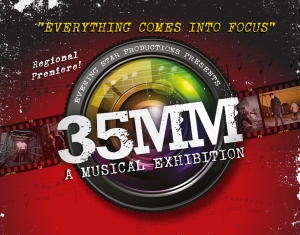 September 15, 2015
BOCA RATON, FL: If a picture is worth 1,000 words — what about a song? Can a picture inspire a song …or fifteen? In Ryan Scott Oliver’s 35mm: A Musical Exhibition each photo creates a unique song, moments frozen in time; a glimmer of a life unfolding, a glimpse of something happening. A stunning new multimedia musical which explores a groundbreaking new concept in musical theatre, this intricately woven collection of stories told through song re-imagines what the modern American musical can be.

Evening Star Productions will present Oliver’s 35mm: A Musical Exhibition at Sol Theatre in Boca Raton from October 9th through October 25th. (There will be a preview performance on October 8th.)

Evening Star’s Artistic Director Rosalie Grant will direct the production: “35mm has been a unique project to direct,” she says.  Since it’s a brand-new musical we have a clean palette to work from.  That has definitely had its rewards and challenges! Add in the multimedia aspects and we have been tested as a team to analyze what we’ve been given to create theatre art from it.  Add in the incredibly difficult music and lyrical content and we have a powerful musical that belongs emotionally to me, Eric, Elvin, Jordana, Sabrina, Steven and their band-mates … it’s content has been derived from within each of us more so than other musicals with a standard plot construction.  This isn’t your mother’s musical!”

35mm was inspired by the photographs of Matthew Murphy, an internationally recognized photographer who specializes in capturing images of theatre and dance.

“It’s a big piece and covers a wide-range of experiences and sensations,” Oliver said in a recent interview. “Truly, there’s something for everyone in this show, musically and visually. It was the easiest and probably the most rewarding thing I’ve ever written! There were no limits and so I was constantly going down new and exciting paths.”

“The timing of this show couldn’t have been better,” explains actress Sabrina Lynn Gore, who also serves as managing director of Outré Theatre Company. “I was actually looking at this show for Outré to produce for a future season, so when I saw that Rosalie was doing it, I just knew it was a sign that I had to be a part of it. And it’s been an awesome challenge for me. It’s the kind of show I’ve been wanting to be a part of for a long time.”

Gore’s cast mates are equally enthusiastic: “This has been a dream show of mine for years now,” says Steven Michael Kennedy. “And to get the chance to perform it is beyond amazing, let alone the fact that it is the regional premiere performance! The music is some of the most difficult music I’ve worked on (in terms of the constant harmonies), but with this extremely talented cast it has been nothing but a joy!”

Eric O’Keefe wholeheartedly agrees: “35mm is crazy fun and super emotional and I couldn’t be any more excited to be a part of it!” He says.

Composer and lyricist Ryan Scott Oliver is the recipient of the 2009 Jonathan Larson Grant and the 2008 Richard Rogers Award for Musical Theatre. He is an adjunct professor at Pace University in New York, and Artistic Director of the Pasadena Musical Theatre Program in California. He received his B.A. in Music Composition from UCLA and his M.F.A. in Musical Theatre Writing from the Tisch School of the Arts at New York University. He is also creator of the blog Crazytown and member of A.S.C.A.P. Oliver’s work has been heard at the Writers Guild Awards, Off-Broadway in TheatreWorksUSA’s We the People, and countless showcases.

Evening Star Productions’ 35 mm: A Musical Exhibition will run from October 8 – October 25 (there will be a preview performance on October 8 at 8 pm) at Sol Theatre in Boca Raton. Tickets are $25 or $10 for students. Group rates are also available. Tickets are on sale now, and can be purchased at the Sol Theatre box office at 561-447-8829 or on line at www.eveningstarproductions.org. Sol Theatre is located at 3333 North Federal Highway in Boca Raton (33431).

“…the songs are not related except that they are all vibrant expressions of a rainbow of emotions. When pieced together…this musical is a thought-provoking, soul-searching exploration of two mediums fused together as one…There are intense group numbers featuring the powerful ensemble that really move the audience.” – DC Metro Theatre Arts

“The genius of this show is how Ryan Scott Oliver’s music conveys the message of Matthew Murphy’s photographs. I was constantly amazed at how the songs really spoke to each picture individually. Ryan’s music is a fresh sound that was very enjoyable to listen to.” – Call Me Adam

“When theater pundits talk about the future of Broadway and the new generation of composers, they’re talking about artists like Ryan Scott Oliver … a major new voice in musical theater” — Entertainment Weekly