The Frogs
in Concert
November 19th (preview) & 20th Only

The purpose of this collaboration, explains the production’s director, Rosalie Grant, “Is to increase awareness of, and appreciation for historically themed productions, and to create theatre with really cool people!”

‘Freely adapted’ from Aristophanes’ Greek comedy by Sondheim’s frequent collaborator Burt Shevlove, The Frogs was first presented as part of the Yale Repertory Theatre’s 1974 season in the university’s gymnasium’s swimming pool.   In Aristophanes’ version, the play is largely a debate between Aeschylus and Euripides, to determine who is the greater artist – with the winner of the contest to return to Earth to save civilization. In Shevelove’s version, the plot remains much the same, but the contest is updated to be a debate between William Shakespeare and George Bernard Shaw. The 1974 production is particularly noted for its not yet famous cast, which included Larry Blyden, Christopher Durang, Sigourney Weaver, and Meryl Streep.

16th Century is a not-for-profit organization that specializes in Historical Interpretation and Historical Entertainment.  From whimsical and engaging characters representing exaggerations of medieval professions to specific representations of historical figures from the Renaissance, Enlightenment and Victorian eras, 16th century strives to offer history as an “experience” in a thoughtful, fun and engaging way.

“The decision to do The Frogs as part of our Shakespeare Collaborative was a funny one,” says 16th Century’s Chris Schultz. “The Shakespeare Collaborative is a play reading series where we offer staged readings of some of Shakespeare’s lesser known plays.  Last season we did staged readings of Shakespeare’s plays and had a Marlowe Takeover night, where we read one of Shakespeare’s contemporaries, Christopher Marlowe’s play Doctor Faustus.  This season we are reading Shakespeare’s plays set in Greece and some in Rome, so we refer to these as his “Greek(ish)” plays.  Since Shakespeare himself adapted and contemporized several ancient Greek stories and ideas, what better way to have another Takeover than to offer up an obscure, little known Greek play by Aristophanes that had been updated and given a contemporary spin by Stephen Sondheim and Burt Shevelove, itself a dated piece of 1960’s musical theatre?

“The decision to approach Rosalie Grant and (musical director) Rebeca Diaz for this project was a no brainer,” he continues. “Both are familiar with our mission and have worked with us in various capacities in the past, although this is the first time we have ever been able to actively engage in a true collaborative effort, and I am very excited for such extraordinary talent to share their skills with us.  As a small upstart theatre doing work that many might consider old and stale, the opportunity to work with Rosalie Grant who is a giant in the South Florida Theatre Community and Rebeca Diaz, who is an up and coming talent who already has earned amazing respect at her young age is an opportunity for which I am incredibly grateful.  I cannot wait to see what they do with it!” 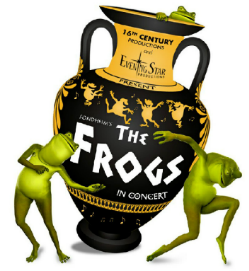