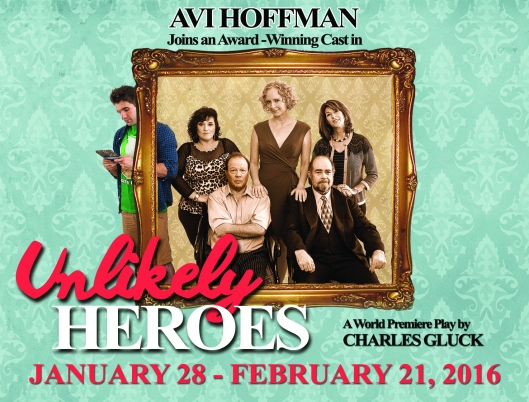 December 29, 2015
BOCA RATON, FL:  Avi Hoffman, whose recent performance as Willy Loman in Arthur Miller’s Death of a Salesman for the New Yiddish Rep at Off Broadway’s Castillo Theatre won consistently rave reviews, will direct Unlikely Heroes, a new play by first time playwright Dr. Charles Gluck.  Hoffman, who will also act in the production, will be joined on stage by a veritable ‘Who’s Who’ of South Florida Theatre – the cast of Unlikely Heroes includes Patti Gardner, Robert Johnston, Margot Moreland, Kim Ostrenko, and Michael H. Small.  The production will run from January 28th – February 21st at the Mizner Park Cultural Arts Center in Boca Raton.

Although the Unlikely Heroes addresses a number of serious subjects – fractured relationships versus family ties and major health issues among other things – there are numerous lighter moments interspersed throughout the play, and Dr. Gluck’s unique background played an integral part in the formation of the family and characters who populate the production: “This is my first play and it has been an amazing ride for me,” he explains.  But this isn’t the first time I’ve had anything to do with show business.  In my previous life I was a Gastroenterologist. And soon after I went into practice, I started doing stand-up comedy.  I did that for about ten or twelve years, and I always loved to write. I’ve been a story-teller my whole life, and I’ve been a theatre nut my whole life.  And my dream always was, when I got out of Medicine, that I’d move into play writing. Unlikely Heroes has been a perfect vehicle for me to integrate comedy and drama because for me, the combination of being a physician and being a stand-up comedian was very organic.”

“The way that this came about was that I was approached by Charles Gluck after a reading I did for (producer/director) Joe Adler at Gable Stage in Coral Gables,” director Hoffman explains. “He told me he had written a play – apparently his first play – and asked me if I would be willing to read it and give him my honest opinion.  And I did!  And here we are, three and a half years later, working on the world premiere of this play, with the most incredible cast I could ever have dreamed of. “And what I love most about Unlikely Heroes is even though the play is so serious – it has some seriously funny moments!” he continues. “Only really great plays can mix that comedy and drama together in such a wonderful and integrated way.”

Avi Hoffman, who is also known for his extremely popular one man shows Too Jewish?,Too Jewish Two! , and Still Jewish After All These Years has won multiple awards for his work, including Performer of the Year ’95 by NY Press Magazine, and the prestigious Los Angeles Ovation Award as Best Actor In a Musical, 2001. He has also been nominated for both the NY Drama Desk and Outer Critics Circle awards.  His 2012 Carbonell Award for Best Supporting Actor in a Musical was in recognition of his work as Wilbur Turnblad in Hairspray at Actors Playhouse in Miami. Hoffman was also featured on the NBC series ‘Law and Order’ as Teddy Wayne, and played key roles in the hit Starz series ‘Magic City’ and Netflix’s ‘Bloodline’.

Unlikely Heroes will run from January 28th through February 21st at the Mizner Park Cultural Arts Center (2nd Floor).  The theatre is located at 201 Plaza Real in Boca Raton’s Mizner Park (opposite Lord & Taylor).  Tickets for Unlikely Heroes are $35 (plus $4.50 S/C).  Excellent group rates (10 or more) are also available at 828-536-0963. Tickets for Unlikely Heroes can be purchased on line at www.UnlikelyHeroesPlay.com, or by phone at 800-595-4849.  Performances days and times are Wednesday, Thursday, Friday, and Saturday at 8 pm and Saturday and Sunday at 2 pm.