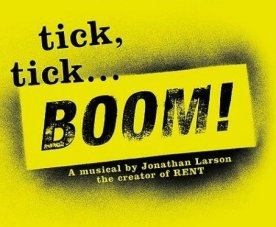 KWP Productions is pleased to partner with local agencies to present tick, tick…BOOM! in part as an HIV/AIDS outreach and education project

WEST PALM BEACH, FL:  Before Rent, there was tick, tick… Boom! This autobiographical musical by Jonathan Larson, the Pulitzer Prize and Tony Award-winning composer of Rent, is the story of a composer and the sacrifices that he made to achieve his big break in theatre. The musical, produced by KWP Productions, will run from November 4th through November 11th at the Bhetty Waldron Theater at Bob Carter’s Actor’s Workshop and Repertory Company in West Palm Beach.

KWP Productions’ Executive Producer Kimberly Rommel-Enright reached out to the Palm Beach County Health Department to and to FoundCare (formerly the Comprehensive AIDS Program) and Compass with the idea of raising public awareness about HIV/AIDS, and offering them the opportunity to provide information and materials regarding prevention and testing, as well as talk backs with the cast, outreach and testing workers and people living with the disease.  The following performances are in support of these agencies: The Florida Department of Health on Friday, November 4th at 8 pm; Compass on Wednesday, November 9th at 7 pm and Foundcare on Friday, November 11th at 8 pm.*

“Through these collaborations and with the support of Janssen Pharmaceuticals and Walgreens we hope we can raise a little bit of money for the agencies that provide services to HIV and AIDS infected clients, honor those in our community who work in the field, those who have died from the disease, and those who continue to live and fight every day,” Enright explains.

Set in 1990, tick, tick… Boom! is the compelling story of personal discovery.  Jon’s girlfriend wants to get married and move out of the city, his best friend is making big bucks on Madison Avenue, and yet he is still waiting on tables and trying to write the great American musical. The three deal with balancing personal and professional relationships, economic issues, HIV awareness, and, of course, discovering personal identity.  tick, tick…BOOM! is packed full of rock and pop songs, homages to Steven Sondheim (a large influence on Larson), reflections of life in the beginnings of the New York HIV/AIDS crisis, and fun commentary on 90’s culture and Gen X.

Tick, Tick…Boom!  will run from November 4 – 11.  All performances will take place at the Bhetty Waldron Theater at Bob Carter’s Actor’s Workshop and Repertory Company, located at 1009 North Dixie Highway, West Palm Beach, Florida, 33401. Tickets are available for purchase on line at: http://kwpproductions.com or by calling 561-339-4687.

* To purchase tickets to the agency performances of tick, tick…BOOM!, please call 561-339-4687 or visit www.kwpproductions.com, look for the agency logos at the bottom of the page and enter the code “redribbon” when prompted. The general public is encouraged to attend any of the performances including the special agency evenings.

“Over 20 years ago I was the founding attorney for our Ryan White Project in my office. For many years (in the early years of the disease) I represented HIV+ and AIDS infected clients in a variety of cases, most often family type cases where I would help them make arrangements for their children when they passed. I also spent one day a week at the Pediatric AIDS clinic. I saw much death and sickness and prejudice. Those were rough years and touched my life in a way I can never fully articulate. I also became a member of our local HIV CARE Council and for over 20 years I have been a part of the board that oversees the money and Ryan White services in Palm Beach County.

Jump forward to last winter when we at KWP Productions were deciding what shows we wanted to do next season. My company manager and another young actor in our company were again trying to convince me to produce Rent. We listened to the music, I cried. I then came to the realization that it was time for us to do the show, not just to produce it but to make it an educational, community project for the public and the company actors. You see, HIV and STDs are on the rise in our community which has already had a historically large population. I regularly work with young (high school and college aged) actors and have become increasingly concerned about their lack of knowledge about the disease and their very cavalier attitude about it as well. They never saw what my generation saw. They have no appreciation for what came before and for those still living with it and taking medication every day to stay alive. I decided it was time to educate this generation and to celebrate and honor those I knew and lost, those fighting the war in the trenches every day and those still fighting and living with the disease every day. The best way I could think to do that was to produce Rent. Unfortunately Rent was under contract to start a tour and despite several months of negotiating with the touring company they would not release the rights to us. So I switched gears. What about tick, tick….BOOM! It was also written by Jonathan Larson and touched on many of the same issues, including HIV/AIDS. By this time I also had a former young company member come back to me to tell me he was HIV positive. It was even more personal now (having never expected to be dealing with this as close as that now in 2016) and I was even more determined.”