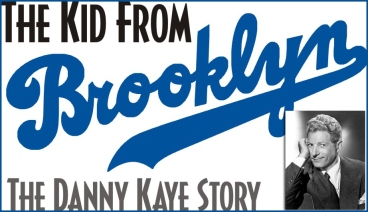 The Kid from Brooklyn: The Danny Kaye Story
February 24 – April 9

“Life is a blank canvas, and you need to throw all the paint on it you can.”
~ Danny Kaye

MARGATE, FL:   Stage Door Theatre will present The Kid From Brooklyn: The Danny Kaye Story, from February 24 though April 9 in the larger of their two theatres.

Based on the turbulent and triumphant life of the multi-talented singer, actor, comedian, and philanthropist,  this intimate musical portrayal chronicles Danny Kaye’s career and his relationships on and off the stage – from an undisciplined improvisational comic to his success under the guidance of his wife, Sylvia Fine.

The Kid From Brooklyn: The Danny Kaye Story includes many of Kaye’s signature songs, including “Tchaikovsky,” “By Jingo,” “Minnie the Moocher” and “Inchworm”, and features the work of songwriters Kurt Weill, Ira Gershwin, Rodgers and Hart, Frank Loesser and Cole Porter, and of course, Sylvia Fine.

The production will be directed by Peter J. Loewy, with musical direction by David Nagy.  Loewy, who owns and operates the Forum Theatre in Metuchen,  New Jersey,  directed three productions in South Florida in 2016, two for Stage Door Theatre, and one for Pigs Do Fly  Productions.  All three were Carbonell Recommended.

Kolb is pleased and excited to have been chosen to portray the iconic entertainer: “If Danny Kaye had not been born,” a Hollywood writer once observed, “no one could possibly have invented him. It would have been stretching credibility far past the breaking point.” Kolb quotes.  “Telling the story of such a man, therefore is stretching me just as far as an actor. This opportunity is comfortably the biggest challenge I have ever attempted, and I only hope to give the audience as entertaining a remembrance of the man as they, and he, deserve.”

“During the rehearsal process for this show, Sylvia Fine became a personal hero of mine,” says Kimberly Adams. “She was a shockingly brilliant woman who did it all – she was Danny Kaye’s wife, the mother of their child, his career manager, and the composer/lyricist of all of his most famous songs. She is the reason Danny Kaye became a household name, and it’s truly an honor to bring her to life on stage.”

The Kid From Brooklyn will run from February 24 – April 9 at Stage Door Theatre. The theatre is located at 8036 Sample Road, in Margate.

Tickets for The Kid From Brooklyn are $38 – $42; $16 student tickets are also available.  Tickets may be purchased at the Broward Stage Door Theatre box office at 954-344-7765 or on line at  www.stagedoorfl.org