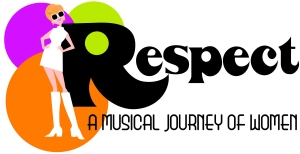 RESPECT: A Musical Journey of Women, which has been continuously evolving since its debut as a one-woman show in 1999, is an entertaining, exuberant and exhilarating look at the lives of women as reflected in the popular music of the 20th Century.  Written by Vanderbilt Professor Dr. Dorothy Marcic, the production chronicles the progress of women through the 20th Century, as played out against the songs they were listening to during various periods in their lives.  Featuring an ensemble cast of four and a live band, the musical features more than 60 songs, ranging from “I Wanna Be Loved by You,” “Tonight, You Belong To Me” and “Diamonds are a Girls Best Friend,” to “Whatever Lola Wants,” These Boots are Made for Walkin’,” and “Born A Woman” to “I Will Survive,” “Hero” and “Video.”  Men as well as women will have no trouble at all identifying with the messages of encouragement and empowerment that RESPECT portrays.