“Who could ask for anything more?”

Saladino Dance Productions’ Rome Saladino and Marina Putane have assembled a superb eight-member ensemble to perform Singin’ and Dancin’ in the Rain, their tribute to Hollywood’s legendary song and dance man, Gene Kelly. The show consistently received standing ovations when it played at the Aventura Arts and Cultural Center and the Eissey Campus Theatre at Palm Beach State College.

Singin’ and Dancin’ in the Rain will run for two performances only – February 22nd and 23rd at the Lyric Theatre in Stuart.

Featuring performers from Broadway, international, national, and local companies, the show pays homage to Kelly, who was one of America’s most renowned and innovative choreographers. 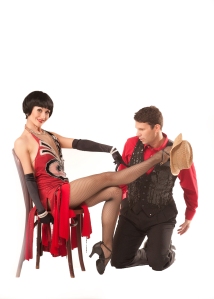 time,” says Saladino, “He helped shape the movie-musical!  Not only is his Singin’ in the Rain still arguably the best movie musical of all-time, but his An American in Paris and On the Town are also in the top 25!  And they were all done in the 1950’s!  Now that’s worth celebrating!”

Marina Putane agrees: “I feel I was born in the wrong era, because the dances we perform in honor of Mr. Kelly have a style and class that I am much more comfortable in.” she explains.  “Even the numbers that are “sexy” — they are always tastefully done.”

Singin’ and Dancin’ in the Rain features musical selections from some of Kelly’s most memorable films, including Pal Joey, For Me and My Gal, Anchors Aweigh, On the Town, An American in Paris, and of course, Singin’ in the Rain, and will showcase music by a roster of legendary Broadway composers – including Rodgers and Hart, Jerome Kern, Ira and George Gershwin, Leonard Bernstein, and Cole Porter.

Marina Putane trained as a rhythmic gymnast; she was a member of the Latvian National Team, which competed in many cities all over the former USSR.  Her dancing career began as a show ballet dancer with Latvian magician, Palchevsky, at the National Latvian Opera House.  She has performed all over the world for many cruise lines as an Adagio and show dancer. She starred, along with her husband, Rome, in the Andrew Lloyd Weber musical, Song and Dance. 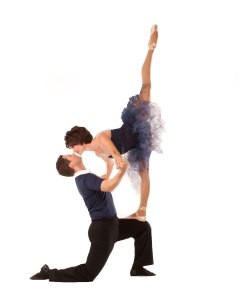 Saladino Dance Productions is the creation of husband and wife team Rome Saladino and Marina Putane.  Together they have over 40 years experience on stage, in theatre, and in dance productions.  They have toured the world separately as performers, and together as a dance couple.