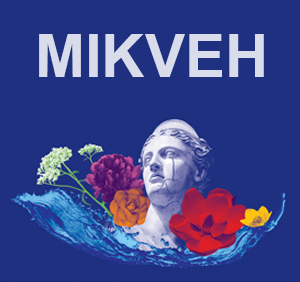 BOCA RATON, FL: Hadar Galron’s powerful play, Mikveh, offers a glimpse into the secretive world of the Jewish ritual bath. The intimate stories of seven women unfold in this revealing story of religious observance and evolving feminist consciousness. With humor, sincerity and tragedy, this provocative play explores the evolving position of women in this religious society. Nominated for six Israeli National Theatre Awards and winning two, including Play of the Year for 2005, Mikveh will be performed at 2 pm and 7:30 pm at Boca Raton’s B’nai Torah Congregation on February 20th, 2019 in the Weiner Auditorium.

Mikveh focuses on two mikveh attendants: Shoshona an older one who believes in respecting the privacy of the women who come for their ritual immersions; and Shira a younger one from an outside community who believes the all-female space should be a place to find solidarity and share information. The two clash early and often over what to do and say regarding, among others, Chedva, a client whose naked body reveals she is clearly being physically abused by her husband, a powerful politician; and Tehila, another, just 18 years old and terrified of her wedding night with a groom she will only meet earlier in the day. (J. Kelly Nestruck, The Toronto Globe and Mail)

“The beauty of purification under the laws of Judaism, immersed with the courage and empowerment of women that has indeed led to many changes in both women and men have driven me throughout this project,” Upbin says. “The #MeToo Movement, which women have privately felt for centuries, and the awareness of recognizing the signs of depression and actually stepping up to do something are paramount in this compelling piece by Hadar Galron. I thank her for the play… and I thank my mother for giving me the most beautiful Jewish upbringing.”

Sound design for Mikveh is by Carbonell Award-winner Matt Corey and lighting design is by Sean Cutler, Producing Director of Ft. Lauderdale Children’s Theatre and two-time winner of BroadwayWorld.com’s Best Director of a Musical award.  Set design is by Ardean Landhuis, costume design is by Carole Barou Mootoo, and the production’s stage manager is Jerry Jensen. Musicians Mario Zelaya (Violin) and Leanna Ginsberg (flute) will accompany the production.

Shari Upbin (Producer/Director) became a member of Actors Equity when she was just 13. She is a member of the Society of Stage Directors and Choreographers; she was the president of the League of Professional Theatre Women/New York for seven years and is currently President of the National Society of Arts and Letters, Florida East Coast Chapter.   Shari has produced and directed over 50 productions in New York and around the country and was one of the original producers of the hit Off Broadway Grammy nominated show One Mo Time.  Some of Shari’s Florida directing credits include Women’s Minyan, Broadway Live! and Hollywood Live!, Confessions Of A Jewish Shiksa…Dancing On Hitler’s Grave at the Kravis Center, Dames In Divaland, From Door to Door, In the Voice of Our Mothers (at the Posner JCC), and Bridge & Tunnel and the recent sold out production of To Life at the Willow Theatre in Boca Raton.