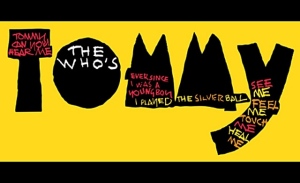 Entr’Acte Theatrix is pleased to announce auditions for The Who’s Tommy on Monday, August 19, 2013.  The auditions will take place at Palm Beach Day Academy, 241 Seaview Avenue, Palm Beach, FL, 33480 at 6:30pm.  All auditioners should have the following prepared:

Everyone must be prepared to move.

Rehearsals begin on September 3, 2013, and are Monday, Tuesday, Thursday evenings, and Sunday afternoons.  The show opens on October 17, and runs through October 27, with matinee performances on Saturdays and Sundays.  There will be 10-12 performances.  Rehearsals will be at Palm Beach Day Academy, 241 Seaview Avenue, Palm Beach, FL, 33480, and performances will be at the Crest Theatre, Delray Beach Center for the Arts, 51 N Swinton Avenue, Delray Beach, FL.

There will be compensation, based on experience and role.

CAPTAIN WALKER:
A former soldier with lingering guilt. He murders his wife’s lover after coming back from a POW camp, resulting in Tommy’s trauma-induced blindness, deafness, and dumbness. Father to Tommy and husband to Mrs. Walker.
Male, 30-40 yrs old
Range: F3 – C#5

COUSIN KEVIN
A bully with sadistic tendencies. Tortures his cousin, Tommy, when they’re young and later seizes the opportunity to profit from Tommy’s success.
Male, 18-25 yrs old
Range: Ab2 – B4

SALLY SIMPSON
A bold, sensitive, and excitable teenybopper. Sally develops a fan crush on Tommy and rushes the stage to be close to him.
Female, 15-18 yrs old
Range: F3 – D5

THE SPECIALIST
A doctor with modern ideas about how to cure Tommy. Tommy’s parents hire him in their desperation to find any cure for their son.
Male, 30-45 yrs old
Range: G#3 – F4

TOMMY/NARRATOR
An embittered young genius stricken deaf, dumb, and blind after a childhood trauma. Tommy discovers that he is a natural master of pinball, and later becomes a cult-like hero figure to masses enthralled by his story. Captain Walker and Mrs. Walker’s son.
Male, 18-25 yrs old
Range: Db3 – B4