at the Delray Beach Center for the Arts’ Crest Theatre
January 3rd & 4th, 2015
and The Lyric Theatre in Stuart
January 6th, 2015

Steve Solomon will bring his new hit show, Cannoli, Latkes & Guilt…The Therapy Continues… to The Delray Beach Center for the Arts’ Crest Theatre on January 3rd and 4th, 2015, and to the Lyric Theatre in Stuart on January 6th, 2015. Cannoli… is a perfect showcase for Solomon’s impressive comedic talent, his inimitable story-telling ability, and his funny and clever facility with words, accents, and sounds. The show is full of new stories – those familiar with Solomon’s earlier productions know his family consistently provides him with a goldmine of humor and humorous situations – as well as a compilation of some of the best of his earlier work. His previous shows include My Mother’s Italian, My Father’s Jewish & I’m in Therapy, My Mother’s Italian, My Father’s Jewish & I’m STILL in Therapy, and Steve’s Holiday Show (and his personal favorite) My Mother’s Italian, My Father’s Jewish …. & I’m Home For the Holidays.

Steve Solomon’s humor is universal, and universally loved.  Enhanced by his talent for impersonation and his mastery of different dialects – he does approximately 20 different characters and voices in his shows – his stories about his mixed heritage Italian/Jewish family resonate with everyone, no matter what their ethnicity, and have delighted and entertained audiences for over 4000 performances. 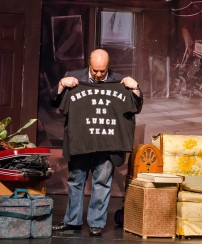 He will also tell you his shows are full of stereotypes:
“Yep,” he says, in answer to his ‘politically correct’ critics “That was my life; stereotypical Italian and Jewish aunts who spent the entire day in house dresses stirring sauces and soup.  Maybe they were stereotypes, but they were – they are – my family, and I’m only describing what I know… and love!

“In fact,” he continues, “Not once, in the 12 years my plays have been touring, have I ever received a complaint from a patron about how offended they were – indeed it’s usually the opposite.  I get dozens of e-mails and letters thanking me for the show and saying, ‘….that was my uncle….’  Or, ‘you nailed my Mom….’”  Or “…I think we grew up in the same house…”

Steve Solomon epitomizes the word ‘multifaceted’.  He is an accomplished pianist, composer, and lyricist; a member of MENSA, a painter and cartoonist (all his show logos are his own creations); a teacher – he has two Master’s degrees and an SDA and ABD degree in education and taught physics in Long Island, New York (where he eventually became Assistant to the Superintendent of Schools); and according to his wife he can fix anything except, according to Solomon, the way certain seniors drive in South Florida!

Tickets for Cannoli, Latkes & Guilt! The Therapy Continues…  are on sale now, and can be purchased by calling the Delray Beach Center for the Arts’ Crest Theatre at 561-243-7922 or on line at www.delrayarts.org . Tickets for the Lyric Theatre production are available at www.lyrictheatre.com or by calling 772-286-7827.

“After the first time seeing Solomon and his work, I’d be happy to see him in anything.”
Shapiro on Theatre – December 10, 2014

“…the crowd is in the palm of his hands, where they stay all through this hilarious evening. Literally, people were falling out of their seats with laughter.”
Gail Obenreder – Delaware Online – December 8, 2014

“Judging from the riotous response at a recent performance, it is obvious that
Solomon has it right.”
Caryn Robbins—Broadway World

About the Delray Beach Center for the Arts:
Now celebrating its 25th Anniversary Season, Delray Beach Center for the Arts offers “a total arts experience(tm)” through events, theater, exhibits and learning opportunities.  The historic campus includes the intimate Crest Theatre (in the restored 1925 Delray High School building) the Cornell Museum of Art (in the 1913 Delray Elementary building), and the Vintage Gymnasium (c. 1925).  The Pavilion, which opened in 2002, hosts outdoor concerts and festivals.  The School of Creative Arts (located on the second floor of the Crest Theatre) offers art, photography and writing classes and workshops.  The Center also serves as a venue for community, corporate, private and media events.  For information on performances, exhibits, classes or facility rentals, call 561-243-7922 or visit DelrayArts.org.

This project is sponsored in part by the State of Florida through the Florida Department of State, Division of Cultural Affairs, and the Florida Council on Arts and Culture.