August 29, 2019
DELRAY BEACH, FL:  It’s never too early to think about Halloween, and who better to celebrate the fast approaching holiday with than the denizens of Dr. Frank N. Furter’s home-sweet-castle in Richard O’Brien’s beloved cult classic, The Rocky Horror Show.   Entr’Acte Theatrix is inviting audiences to come do the Time Warp again… when they present ‘Rocky’ in the Fieldhouse at Old School Square from September 13th through September 22nd.

The Rocky Horror Show is an outrageous assemblage of – and humorous tribute to – the most stereotypical science fiction and horror movies, Marvel comics, Frankie Avalon/Annette Funicello outings and rock ‘n’ roll of every vintage. The play (upon which the classic film The Rocky Horror Picture Show is based) has grown from an experimental production originally produced in a small London theatre in June 1973, to a cult phenomenon with fans world-wide.  The musical tells the story of a newly engaged couple who, when caught in a storm, find refuge in the home of a decidedly unusual scientist who is madly working towards unveiling his latest and greatest creation.

Rocky is also the quintessential audience participation show, and Entr’Acte will have what have come to be known as  ‘survival kits’ available for purchase for those who want them.

This is the fourth time Entr’Acte Theatrix will present The Rocky Horror Show.   Their 2012, 2014, and 2017 productions were so successful that when an encore presentation was suggested, it was, as Entr’Acte’s founder and producer Vicki Halmos says, “A ‘no brainer’!  Our audiences love the show,” she continues, “and so does our cast.  You can see it during rehearsals.  Their enthusiasm is boundless, and they are so excited to be able to bring all these characters to life – figuratively and literally!” she says with a smile.

Carlo Rufino-Sabusap, who has appeared in each of the company’s Rockys as well as numerous other Entr’Acte productions, will direct the production.  He will also play Dr. Scott:

“In an age and political climate where we should be progressing as a society and species, we are instead given constant reminders that bigotry is living strong and that people who are different from the status quo are considered less than people, and in some cases, stripped of their rights,” he says. “Rocky Horror celebrates the idea of the outsider. We not only want the audience to have fun, but they should also realize that the enjoyment they are experiencing is because a group of wildly different people from different backgrounds and life experiences worked together to make something great. This is our 4th time mounting this show, and I believe it is our value of working TOGETHER, and including our differences, that we are making something Great Again.”

The Rocky Horror Show will run for 11 performances only, from September 13 – 22, in the Fieldhouse at Old School Square. The theatre is located at 51 North Swinton Avenue, in Delray Beach (33444) Tickets are on sale now, and are available on line at http://entractetheatrix.com/. Ticket prices range from $45 for VIP Table Seating, $35 General Floor Seating, $25 Balcony Seating.

For more information about Entr’Acte Theatrix or The Rocky Horror Show visit www.entractetheatrix.com, or contact Carol Kassie at carol@carolkassie.com /561-445-9244.
~ 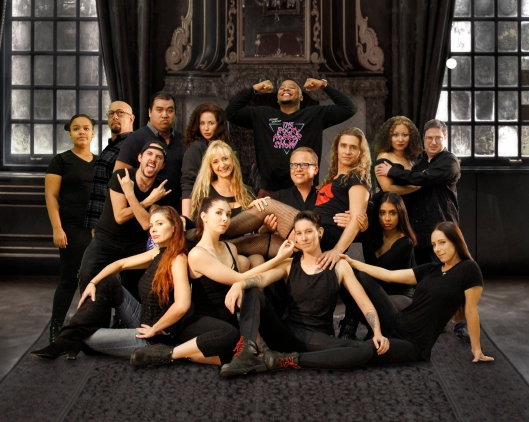 The Cast of Entr’Acte Theatrix’ The Rocky Horror Show