WEST PALM BEACH, FL:  MNM Theatre Company is pleased to announce that casting has been completed for their upcoming production of the award-winning musical Man of La Mancha, which will run from September 13 – September 29 in the Rinker Playhouse at the Kravis Center for the Performing Arts.

“We are absolutely thrilled with this cast, and this crew,” MNM’s Executive Producer/Artistic Director Marcie Gorman said recently. “We at MNM are committed to hiring locally – there is such a depth of talent and ability in South Florida – and our La Mancha actors, musicians, and entire creative team are proof of that.”

Bruce Linser, winner of the 2018 Carbonell Award for Best Direction of a Musical for his work on Woody Guthrie’s American Song, will direct Man of La Mancha:
“As an actor myself, I love working with actors during the audition and rehearsal process,” Linser says.  “They’re so hungry to get inside these characters and this story, and it’s exciting to help them personalize their work, and to watch them come alive within it.   I always look for an essence of the character within the actor at auditions, and I think this is going to be a particularly powerful retelling of this beautiful story with this particular cast of actors.”

Paul Reekie will serve as Man of La Mancha’s Musical Director, and Christine Kellogg will choreograph the production.

*Appearing through the courtesy of Actors’ Equity Association, the Union of Professional Actors and Stage Managers in the United States.

Michael McKenzie (Cervantes/Don Quixote) lives in both NYC and Boynton Beach and has appeared locally in Sweeney Todd (Palm Beach Dramaworks), We Will Not Be Silent (Theatre Lab at FAU), Dangerous, Déjà Vu (Caldwell Theatre), and Dinner With Friends (Cuillo Centre). On Broadway he appeared in Waiting in the Wings, The Man Who Came to Dinner, and Eastern Standard. His Off-Broadway credits include Kari Floren’s If Wishes Were Horses, A Late Supper, and Voices of Swords. Michael has toured nationally in Much Ado about Nothing, As You Like It, Orchards (John Houseman’s The Acting Company), and regionally (Baltimore Center Stage, Denver Center, Pittsburgh Public, Pioneer Theatre, Triad Stage, Capital Rep, Arkansas Rep, and many others). Some of his television and film credits include House of Cards, Orange is the New Black, Unbreakable Kimmy Schmidt, Younger, Blacklist, Law & Order, All My Children, and many episodes of Babylon 5.

Anna Lise Jensen (Aldonza) received a Silver Palm Award for her performance in MNM Theatre Company’s 2018 production of I Love You, You’re Perfect, Now Change. She received both a Silver Palm Award and a ‘Best Actress in a Musical’ Carbonell Award for her performance in Slow Burn Theatre Company’s The Bridges of Madison County. Anna Lise has also received Silver Palm Awards for her work as Reza in Once (Actors’ Playhouse) and Alison in Fun Home (Zoetic Stage). Other South Florida theatre credits include Indecent (Palm Beach Dramaworks), Finding Mona Lisa, (Actors’ Playhouse), Sunday in the Park With George, and Passion (Zoetic Stage). Next season she will appear in the Florida premiere of Villainous Company (Primal Forces) and as Mother in Ragtime (Slow Burn Theatre Company).

Mark Kirschenbaum (Manservant/Sancho) is making his MNM Theatre Company debut with Man of La Mancha. He has been seen all over the world as an actor, educator, and director.  Some of Mark’s recent credits include Sam Posner in Crossing Delancey, Mal Beineke in Addams Family: The Musical, Peter in Company, Bob Cratchit in A Christmas Carol, and Man 1 in I Love You, You’re Perfect, Now Change.  He had the opportunity to join the Brooklyn cast of Man of La Mancha in 2007, where his portrayal of the Padre received critical acclaim from the New York Times.

WEST PALM BEACH, FL:  The award-winning MNM Theatre Company, under the direction of Executive Producer and Artistic Director Marcie Gorman, will mount two of Broadway’s most beloved and successful musicals in 2019.  Man of La Mancha will run from September 13th through September 29th, and A Funny Thing Happened on the Way to the Forum will run from November 22nd through December 8th.  Both shows will be performed in the Raymond F. Kravis Center’s Rinker Playhouse, and Forum will be a co-presentation with the Kravis Center.

“We chose these two shows after much deliberation,” Gorman explains. “And it was a truly collaborative decision.  Our team sat down together right after Grease closed and looked at every aspect of our season.  We were thrilled with the audience response to our shows – two sell-outs in one season! (Grease and Avenue Q).  And since our patrons were so supportive, we decided to include them in the process – Grease audiences were surveyed as to what they would like to see for our next season.  Man of La Mancha was the top pick by far, with Forum coming in a strong second.  We’re thrilled, since these two shows are both Broadway classics, but totally different from one another.

“We pride ourselves on the fact that MNM uses local talent almost exclusively in our productions,” Gorman continues, “and these two shows will allow us to continue to showcase the incredible abilities of our own community.”

Dominick Ruggiero will direct the witty, irreverent, and deliberately and hilariously politically incorrect A Funny Thing Happened on the Way to the Forum and Bruce Linser will helm Man of La Mancha. 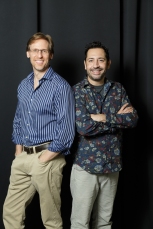 Linser is a 2018 Carbonell nominee for his recent direction of Palm Beach Dramaworks production of Woody Guthrie’s American Song: “Man of La Mancha has been on my bucket list for years,” Linser said recently.  “Set in a Seville prison during the Spanish Inquisition, the musical theatricalizes the adventures of epic literary character, Don Quixote, as performed through the eyes of his creator, author Miguel de Cervantes. It is one of the most beloved musicals of all time, and is a testament to the power of art, hope, and love to enrich and transform our lives.”

Paul Reekie, who has worked with MNM since their first production (A Chorus Line, 2014) will serve as the musical director for both Man of La Mancha and A Funny Thing Happened on the way to the Forum: “While both shows are “period pieces” (in their own ways), the orchestration in Forum has a contemporary yet classical musical theatre sound, while La Mancha strives for an organic, natural tone (no piano!),” he says.  “Both shows were written within five years of each other, and both have a trumpet in them, but contrast a “musical theatre” trumpet sound from the modern age (Forum) with a renaissance trumpet sound (La Mancha), and there you will hear the vastly different effect one instrument can have on the mood of the show.”

Man of La Mancha will run from September 13 – September 29, and A Funny Thing Happened on the Way to the Forum will run from November 22 – December 8.  Both productions will take place in the Raymond Kravis Center for the Performing Arts’ Rinker Playhouse.   Ticket prices and details will be coming soon.

MNM Theatre Company attained not-for-profit 501(c)(3) status in 2018. They are an award- winning theatre company that performs at the Raymond F. Kravis Center for the Performing Arts in the Rinker Playhouse. Donations can be sent to MNM Theatre Company, 318 S. Lake Drive, Lantana, FL 33462.  For more information, please visit mnmtheatre.org.

A Funny Thing Happened on the Way to the Forum
November 22 – December 8
Book by Burt Shevelove and Larry Gelbart
Music and Lyrics by Stephen Sondheim
Performances:
Wednesday, Thursday, Friday, & Saturday at 7:30 pm (no Thanksgiving night performance)
Saturday & Sunday at 1:30 pm
All performances in
The Rinker Playhouse at
The Raymond F. Kravis Center for the Performing Arts
701 Okeechobee Blvd.
West Palm Beach, FL 33401
mnmtheatre.org
Like Us on Facebook!