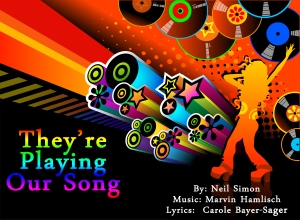 It is said that opposites attract.  Pair a somewhat up-tight classically trained musician with a young lyricist who’s a little bit more than ‘out there’, and sparks just might fly.  Add a script by comedy master Neil Simon to the mix, stir in music by Marvin Hamlisch and lyrics by Carole Bayer-Sager and musical theatre magic is bound to occur.

Carbonell Award winners Margot Moreland and Oscar Cheda will star in the Boca Raton Theatre Guild’s production of They’re Playing Our Song at the Willow Theatre in Sugar Sand Park.  The show will run from November 8th through November 24th.  The two will portray Vernon Gersch and Sonia Walsk, the fictional counterparts to Hamlisch and Bayer-Sager whose real-life romance served as the inspiration for the musical.

“They’re Playing Our Song was an enormous hit when it played on Broadway,” says BRTG Artistic Director Keith Garsson. “It ran almost three years. The script and score still resonate with great music and very funny dialogue. And the theme of the show – that can two people can maintain both a personal and professional relationship with some sacrifice and compromise – offers an extremely entertaining two hours.

“They’re Playing Our Song was one of the last personal musicals,” Garsson explains.  It was the era of shows like Dreamgirls and Falsettoland. Soon afterwards, Broadway gave way to another “British invasion” with productions like Phantom of the Opera and Les Miz. Since then, spectacles have become the new normal.”

“We have a terrific team in place for this show,” Garsson (who will also direct the show) continues.  “Caryl Fantel is our musical director, and Ron Hutchins will choreograph both Song and our upcoming production of Pippin.  They’re Playing Our Song is a terrific fit for us in that it hasn’t been done often.  And it continues the BRTG’s tradition of producing musicals from the sixties and seventies – a time a lot of us remember fondly.”

They’re Playing Our Song will run from November 8th through November 24th at the Willow Theatre in Sugar Sand Park.  The theatre is located at 300 South Military Trail in Boca Raton, just south of Palmetto Park Road. Performances are Wednesday through Saturday at 8 pm, and Wednesdays, Saturdays and Sundays at 2 pm. Tickets are $35, and are on sale now. Tickets can be purchased at the Willow Theatre Box office: 561-347-3948.

The Boca Raton Theatre Guild is a not-for-profit organization dedicated to producing professional productions and advancing the art of theatre in the South Florida community.