The Broward Stage Door Theatre has announced its line-up of productions for 2014-2015.  For its 21st season the company, headed by Derelle Bunn and Dave Torres has planned an exciting mix of comedies, musicals, and straight plays that will appeal to their broad base of theatre patrons.

play Butterflies are Free (August 1st – September 14th, Theatre 1). The play’s plot revolves around a Manhattan blind man whose controlling mother disapproves of his relationship with a free-spirited hippie. The title was inspired by a passage in Charles Dickens’ Bleak House: “I only ask to be free. The butterflies are free. Mankind will surely not deny to Harold Skimpole what it concedes to the butterflies.”

Jersey born and raised Joe DiPietro, is set in Hoboken, New Jersey.  The play is a warm, tender, and very funny tale of late love between two senior citizens. “The play adroitly explores relationships between men and women in their golden years, as well as how the invisible ties of family often tie our hearts harder and faster than any love affair. A tale that mixes heartbreak with its humor and opera with the laughter…” (Naples News) DiPietro is also the author of I Love You You’re Perfect Now Change, Memphis (2010 Tony-award winner for Best Musical), All Shook Up, The Toxic Avenger and Over the River and Through the Woods, which will run this April 4th through May 11th as  part of Stage Door’s current season.

musical with a book by Clarke Peters and lyrics and music by Louis Jordan. Nomax, whose girlfriend has left him and who is without money, finds Big Moe, Four-Eyed Moe, Eat Moe, No Moe, and Little Moe emerging from his 1930s-style radio to comfort him. They sing the hit songs of songwriter and saxophonist Jordan, whose new slant on jazz paved the way for rock and roll in the 1950s. Five Guys Named Moe is ‘an exhilarating, all-embracing theatrical experience, complete with some uproarious audience participation that’ll have spectators leaping out of their seats to join the celebration!’

Door.  “We are delighted to get the Florida Premiere of Old Jews Telling Jokes,” says Bunn.  “It played in New York and Chicago and sold out for long runs.”  Old Jews Telling Jokes is scheduled to open November 1st, and run through January 4th (Theatre 1), “But we wouldn’t be surprised if audiences demand it stays longer!” says Bunn. Initially a popular website, this revue has been described as “a pickle-barrelful of giggles.” It celebrates the rich tradition of Jewish humor “and all the rabbis, complaining wives, fed-up husbands, patience-challenged physicians, gossiping ladies and competitive men” populating it.

Theatre 2) In this clever two act musical, songwriters Joe DiPietro (book and lyrics) and Jimmy Roberts (music) offer a series of vignettes connected by the central theme of love and relationships. The play’s tagline is “Everything you have ever secretly thought about dating, romance, marriage, lovers, husbands, wives, and in-laws, but were afraid to admit.” I Love You, You’re Perfect, Now Change is the second longest running off-Broadway musical in history.

John Peterson will return to the Stage Door Theatre in George M. Cohen 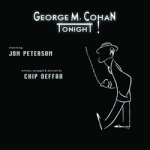 Tonight! (March 20 to April 26, 2015, Theatre 2) an upbeat one-man play about the beloved song and dance man George M. Cohan – capturing in 95 fast-moving minutes the essence of the man, his music, and the fabulous era of show business he came up in.  A dazzling showcase for a song-and-dance man with flair. Peterson, who has received rave reviews everywhere he has performed this show, channels a swift, colorful portrayal of this most fiercely American musical figure.  Peterson, played the Emcee in a recent Broadway revival of Cabaret, starred in Stage Door’s production of Song Man Dance Man two years ago.

and sexy romantic comedy, we meet Gillian Holroyd, a beautiful and lively free spirit – who also happens to be a witch. Frustrated by a lack of romance in her life and smitten by her handsome neighbor, she “helps things along” by casting a spell. But will she give into the one thing that will take away her magical powers forever? One of John van Druten’s greatest comedy successes, Bell, Book, and Candle has been called “…completely enchanting—a wonderfully suave and impish fantasy.” (New York Times).