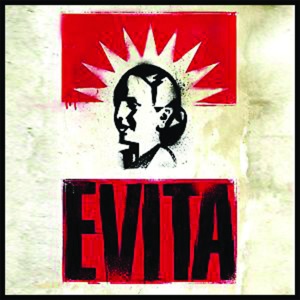 Based on the life of Argentine political leader Eva Perón, who became the spiritual leader of the nation, Evita traces this charismatic woman’s rise from obscurity to fame and fortune as one of the most influential political leaders in the country’s history.

The idea for the show began as a result of a visit to Argentina by lyricist Tim Rice, and a subsequent reunion and collaboration with composer Andrew Lloyd Webber – their first since the release of their double album Jesus Christ Superstar in 1970.  Like Superstar, Evita began as a rock opera concept album.  And like its predecessor, the album produced a smash it single, ‘Don’t Cry for Me, Argentina’, which, much to Rice’s delight would have people “walking into the theatre whistling the tune,” when the album went on to become a full length production – first in London’s West End, where it won the Laurence Olivier Award for Best Musical, and then on Broadway, where it became the first British musical to win the Tony Award for Best Musical.

Evita will be directed by Michael Leeds.  Kevin Black will choreograph the production, and Caryl Fantel is the show’s Musical Director.

“Since the first production in 1978, Evita has had over a thousand productions all over the world,” says Leeds.  “Kevin and I were attracted to this story of a woman who journeys from being an illegitimate, poverty-stricken child in the pampas of Argentina to become the most powerful woman in the world.  This musical is all about passion.  It fuels every scene and every relationship.  We watch the cat and mouse foreplay between Evita and Juan Perón, their rise to power and their manipulation of an adoring public, all seen through the cynical eyes of an impassioned Che Guevara.

“Because the tango is such an integral element to that world, Kevin and I have set theentire show in a tango bar,” Leeds explains. “Kevin hired an extraordinary couple who specializes in the tango and they lead us through the story in dance just as Che does through song.  It’s a potent combination.

“We needed a really talented cast of singers to do justice to Andrew Lloyd Weber’s music, he continues.  “We were lucky to find our fourteen-member ensemble from South Florida’s talented pool of singer/dancers.  We found our Evita (Jenna Pastuszek) in New York, our Che (Trevor Whitaker) in Great Britain, and our Perón is the talented Rick Hvizdak who we just worked with in Promises, Promises.  It’s an exciting production to create and I’m sure it will be just as exciting to watch!”

Caryl Fantel, the shows musical director is equally enthusiastic. “What an epic piece of theatre!” she says. “I’m thrilled to have the opportunity to be part of Stage Door’s production of Evita. This musical tells the powerful story of Eva Perón almost entirely through music that is alternately sweeping and raw, and filled with emotion. Devotees of composer Andrew Lloyd Webber may catch hints of the master’s other works, including Jesus Christ Superstar and Joseph and the Amazing Technicolor Dreamcoat in this music. For our production, we have assembled an impressive group of actor/singer/dancers who share this true-life tale of ambition and political seduction that is timeless and certainly relevant today.”

Evita will run from March 18 – April 24 at The Broward Stage Door Theatre in Coral Springs. The theatre is located at 8036 Sample Road, in Margate.

Tickets for Evita are $38 – $42; $16 student tickets are also available.  Tickets may be purchased at the Broward Stage Door Theatre box office at 954-344-7765 or on line at www.stagedoortheatre.com.