Broadway Stars to Sing in Concert:
A Million Dreams
Featuring Broadway’s
Derek Klena, Christy Altomare, and Samantha Pauly
Will Showcase the Students of
Making It On Broadway

A Million Dreams will feature songs from Broadway productions such as Mean Girls, Carrie, The Greatest Showman, Dear Evan Hansen, and Jagged Little Pill. Klena, Altomare, and Pauly will perform alongside students from the Making It On Broadway program who they will have been mentoring and teaching all week. (Mrs. Doubtfire star Rob McClure will also be one of that week’s mentors.)

Making It On Broadway is an acclaimed musical theatre program, founded by Broadway actress, teacher and author Jodie Langel, wherein students learn the realities of what it means to be a modern Broadway professional.  Participating in classes taught by Broadway professionals, students take acting, singing, and dancing classes every day, and are also given the opportunity to work with, learn from, and perform for professionals from every aspect of ‘the business’, including directors, music directors, producers, and Tony Award winners.  Past notable Making It On Broadway master class instructors include Sutton Foster, Kristin Chenoweth, Jeremy Jordan, Megan Hilty, Norm Lewis, and Jason Alexander.

Derek Klena originated the role of Eddie Birdlace in the stage adaptation of Dogfight and the role of Dmitry in Anastasia on Broadway.  He received a 2020 Tony Award nomination for Best Featured Actor in a Musical for his portrayal of Nick Healy in Jagged Little Pill.

Christy Altomare played Wendla in the first national tour of Spring Awakening and Sue Snell in the Off-Broadway revival of Carrie.  She made her Broadway debut as Sophie in Mamma Mia and originated the titular role in the Broadway premiere of Anastasia.

Samatha Pauly originated the role of Katherine Howard in Six the Musical on Broadway.  She played Eva Peron in the critically acclaimed West End revival of Evita at Regent Parks Open Air Theatre.

Jodie Langel’s many Broadway and touring credits include Les Miserables (Cosette), Joseph and the Amazing Technicolor Dreamcoat (Narrator), Cats (Grizabella), and the pre-Broadway production of Martin Guerre (Bertrande). Her New York credits also include Bernstein’s Mass at Carnegie Hall/Kennedy Center, I Love You, You’re Perfect, Now Change at the Westside Theatre. Jodie won “Best Actress” in I Come For Love at the NYMF Festival in New York City and was a part of the New York Workshop of The First Wives’ Club (understudy to Ana Gastayer). Locally she has received numerous Carbonell Award nominations and a Silver Palm Award.  Jodie also co-authored the book ‘Making It On Broadway: Actors’ Tales of Climbing to the Top’, which has become required reading at leading conservatories around the country.

The Lauderhill Performing Arts Center is located at 3800 NW 11th Place (33311), in the Central Broward Regional Park on the Northeast corner of Sunrise Boulevard and State Road 7. 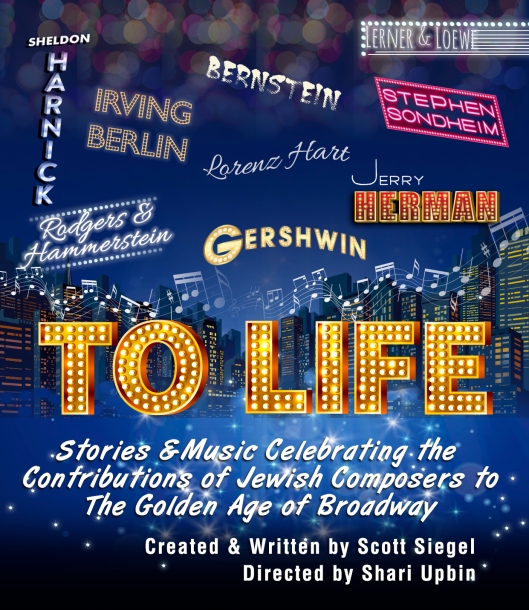 To Life: Stories & Music Celebrating the Contributions of Jewish Composers to The Golden Age of Broadway

“I think it is just as important to sing about beautiful mornings as it is to talk about slums. I just couldn’t write anything without hope in it.”
~ Oscar Hammerstein”

BOCA RATON, FL:  From Irving Berlin to Leonard Bernstein, and from Rodgers and Hammerstein to Stephen Sondheim, not to mention Fanny Brice, Zero Mostel, Jerry Orbach, and Barbra Streisand, Jewish composers and artists have contributed tremendously to Broadway.   Black Box Booking and Hy Juter will present To Life: Stories & Music Celebrating the Contributions of Jewish Composers to The Golden Age of Broadway at the Willow Theatre in Sugar Sand Park from January 18th through February 3rd.

“Jewish contribution to the Broadway musical has been phenomenal,” Upbin says. “In fact, Jewish composers and lyricists created the Broadway musical. Children of immigrants, called outsiders – people who struggled for acceptance in mainstream society – created the greatest American shows in history. Show Boat, West Side Story, My Fair Lady, Fiddler on the Roof, Gypsy… and scores (pun intended!) more!

“Growing up in a household where my mother was a singer and my dad a writer for Jack Benny, I learned musical theatre songs early, and created dances for my parents to enjoy,” she continues. “I was encouraged by their enthusiasm for a good song, a good joke. Yes, my parents spoke Yiddish when they did not want me to understand what they were saying… but I always felt the warmth of the light in their eyes. I dedicate all the Jewish one-liners and the amazing songs heard in this show to my parents and grandparents. Immigrants who found their place in America urging me to continue their legacy. Tradition!”

To Life: Stories & Music Celebrating the Contributions of Jewish Composers to The Golden Age of Broadway was created and written by Scott Siegel.  Siegel is a well-known pop culture critic who covers film, theatre, and cabaret with his wife, Barbara, writing “The Siegel Column” for TheatreMania.com, and “The Two of Clubs” column for Talkin’Broadway.com. He has created more than 300 major concerts that have been performed worldwide, he has written/produced/directed concerts for Michael Feinstein, and has created scores of nightclub acts that have played at major clubs around the globe. However, he is perhaps best known as the creator/writer/director/host of New York City’s Town Hall Theatre’s signature series, Broadway by the Year® and Broadway Unplugged.

To Life will run from January 18 through February 3 at the Willow Theatre in Sugar Sand Park.  Tickets are $35; group rates (6 or more tickets purchased in one transaction) are $30.  Tickets can be purchased on line at www.willowtheatre.org or by phone at 561-347-3948.  The Willow Theatre is located at 300 South Military Trail, in Boca Raton’s Sugar Sand Park (33486).

To Life:  Stories & Music Celebrating the Contributions of Jewish Composers to The Golden Age of Broadway

Created and Written by Scott Siegel

About The Willow Theatre:
The Willow Theatre, opened in 1998, is a beautiful 155-seat proscenium theater, located inside Sugar Sand Park Community Center and allows for a unique experience for theatre patrons. Before or after a show, you may wander the nature trails, visit the Children’s Science Explorium, look at the art exhibit on display, or picnic at one of our pavilions.

The Broadway and Off-Broadway hit comes to Boca Raton!

October, 2014 – Boca Raton, FL:
The Boca Raton Theatre Guild was looking for something unique as a follow-up to the company’s recent successful productions of Pippin and Chicago: “Something modern – with music that would appeal to all generations,” says producer Keith Garsson. “And when Everyday Rapture opened on Broadway in 2010 to outstanding reviews and sold-out performances it just stuck in my mind. It’s funny, timely and unlike anything you’ve seen before.” Everyday Rapture will have its South Florida premiere when it previews at the Willow Theatre in Sugar Sand Park on November 7th and opens the following night. It will run through November 23rd.

The show, which has been called a ‘stage memoir disguised as fiction’, tells the story of a young woman’s psycho-spiritual-sexual journey down the rocky path that separates her mostly Mennonite past from her mostly Manhattan future – from the cornfields of Kansas to the clover fields of New York (with a disturbing detour through YouTube!). Everyday Rapture entwines spirituality and show biz.  It follows a young woman as she grows from a Mennonite to a Manhattanite, with many psychological and spiritual challenges on the way.  Gay men, Judy Garland and two preachers named Fred all form major parts of the tapestry woven into the play. Everyday Rapture features songs by numerous singers and songwriters including Johnny Mercer, David Byrne, George Harrison, Roberta Flack, Judy Garland, Sharon Jones & The Dap Kings, and even Mr. Rogers.

“I’m delighted to be directing the Southeast premiere of this unique musical story,” says Genie Croft. “The lead character is an outsider from Topeka – raised as a Mennonite – who follows her dreams to New York, and creates a career as a Broadway actress.  The emotional, humorous, and spiritual arc of the musical is an exciting contrast of two journeys of discovery that cleverly show how divided personalities can lead to some of the most fascinating people out there.”

Musical director Caryl Fantel, who has credits from Off-Broadway to regional

theatres and concert halls throughout South Florida and around the United States is equally enthusiastic about the production:
“I’m excited to work on it because there’s truly something for everyone, running the gamut of musical styles from standards to musical theatre, funk, and rock. We have a top-notch ensemble of vocalists and a rocking band in place,” she continues, “And I can’t wait to share this unique and entertaining piece of theatre.” 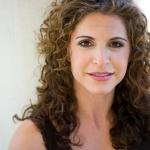 Says lead actress Jodie Langel: “The heart of this show lies in the story of this incredible girl, her desire to be spiritually and morally correct – while dreaming of Broadway, and to do what she loves most – be center stage singing her heart out.”

Joining Langel on the Willow stage will be Ann Marie Olson, Leah Sessa, and Ben Solmor (who is also serving as the show’s choreographer.)

Tickets for Everyday Rapture are on sale now and can be purchased by calling 561-347-3948. Performances are on Thursday, Friday, and Saturday at 8 pm, and Saturday and Sunday at 2 pm. Tickets are on sale now, and may be purchased at the Willow Theatre Box Office at 561-347-3948.  The Willow Theatre is located at 300 S. Military Trail, Boca Raton, 33486 (in the heart of Sugar Sand Park, just south of Palmetto Park Road).